Behind the Idea: How to Seize the Awkward with Droga5 and the Ad Council

We've just wrapped up Mental Health Awareness Month and we've seen some incredible works from all across the creative industry to fight the stigma of talking about your mental health, whoever you are and wherever you are from.

With suicide as the second leading cause of death among young adults, however, it is clear that the fear of talking about mental health does not only afflict adults and people who made it past their teenage years. That is why, in a joint pro-bono partnership between the Ad Council, the American Foundation for Suicide Prevention, the JED Foundation and Droga5, the creative agency has crafted a campaign to Seize the Awkward and help young adults be more open about their mental health issues.

We've had the chance to speak with the creatives at Droga5, who shared with us the ins and outs of the campaign, while showcasing impressive flexibility and spirit of adaptation in the light of COVID-19. Without further ado, we'll leave you to the answers and considerations from all across the Droga5 team: senior copywriters Mietta McFarlane and Dan Litzow, senior art director Luke Chard and executive creative director Kevin Brady. 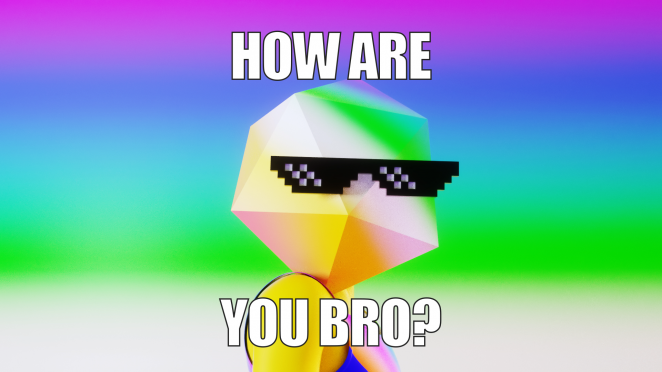 What was the brief? (Mietta McFarlane, Senior Copywriter)

The brief was basically to build off the last campaign where we helped young adults identify and embrace the awkward feeling that can come when talking about mental health instead of shying away from it. We were tasked with taking that one step further and crafting a campaign that would encourage young adults to actually take action, start, and continue conversations around mental health.

In short, we had to get young adults talking.

Brainstorming for the campaign was unsurprisingly tricky. It’s a very serious subject matter that we didn’t want to gloss over or make light of, nor did we want to over-dramatize and lecture. To add to this, we really wanted to make sure we met our target where they lived so that meant we had to really dig into what they were doing day to day, consuming, watching, etc, some of which was pretty foreign to us.

So it was kind of a juggling act on top of a balancing act.

Tell us more about the concept. Why was it the right choice? (Dan Litzow, Senior Copywriter)

Funny enough, the concept seems fairly obvious in hindsight. If you want to get young adults talking about mental health, give them the means to reach out.

That thought was concise enough to be easily understandable and actionable by young adults, but also flexible enough to go across all sorts of media, people, places, and things.

So we set out to not only showcase all sorts of ways to break the ice and reach out, but also to craft them into tools for anyone to easily use to start the conversation. Everything we did had to be practical as much as it was entertaining.

But we also wanted something that our TikTok-crazed, music-obsessed target would genuinely enjoy watching. We thought, why not do a music video with an up and coming Gen Z artist and visually craft it in an internet-ty meme-esque style? 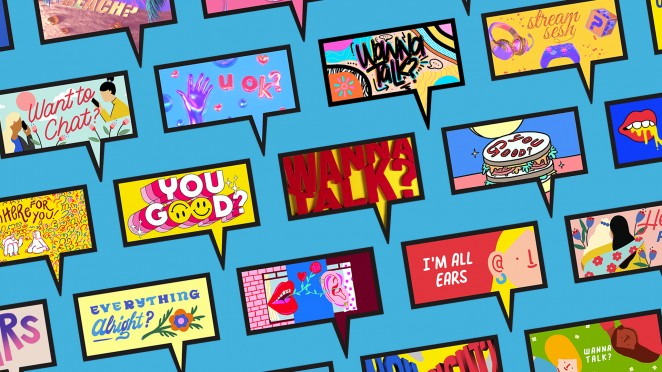 What was the production process like? What was the biggest challenge? (Luke Chard, Senior Art Director)

Well, right as we awarded our director and were about to look into abandoned malls across the country to shoot a big live-action musical number, COVID-19 happened. So pretty much the whole production was thrown for a loop. Things were even touch and go if it would even happen with everything going on.

The thing is, we realized our cause and our message were actually just as relevant if not more, in quarantine times. You could still reach out to a friend even while separated in isolation. So, we built upon our original message, pivoted, and got behind the mantra of “You don’t have to be there to be there”.

We then rethought what our film would be, leaning more heavily into animation as well as live action filming and making sure we didn’t show any ways of reaching out that put folks at risk. Back on track, it was full-steam ahead on a totally new way of doing a production for everyone.

Almost immediately, we met our biggest challenge—what everyone in the industry is facing currently—figuring out how to do everything remotely.

For us, we had to start with building a catchy song from scratch with no one being in the same room. Luckily, the folks at Walker, and our artist, Akinyemi, went above and beyond in helping us going through version after version, tweaking lyrics, beats, instruments, in video chats and emails.

Then, it came time to actually construct film. First and foremost, we could not have chosen a better director than Kris Merc for this. He not only rolled with all the punches of the production realities, but thrived in them.

First, we had to do a shoot remotely. Strangely enough, it kind of ran like an in-person shoot, but just, you know, from the comfort of our couches and makeshift home offices. Our actors were tasked with filming themselves, being their own dps, and uploading their own footage as Kris directed them from a video chat, and we chimed in here and there with notes and suggestions of where to have the imaginary wrap dinner.

Secondly, we had always intended the film to be a mix of live-action and animation, but now had to lean more heavily into animation, so we had to piece all of that together in an edit and had to do it, you guessed it, remotely. Fortunately for us, Reuter over at Nice Shoes was such a talented delight to work with. They did everything in their power to make a remote video chat edit feel like the real thing. Even though the sessions were fast and furious, lasting for hours and hours day and night perfecting the piece, it was actually quite fun and pretty efficient to boot.

So, we’re beyond thankful to our edit team for being open and letting us work like that.

And if we needed another reason to love Kris Merc, he had this small army of animator pirates that brought all these conversation-starters to life in ways we never saw coming. Each time we saw how the animations were coming along, we practically fell off our couches in sheer amazement. 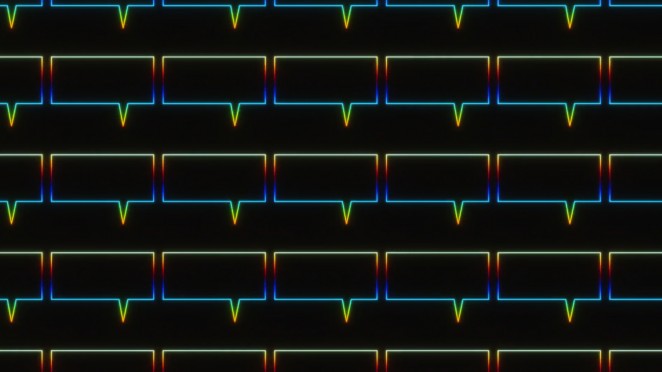 What’s the main message of the campaign and why does it matter? (Dan Litzow, Senior Copywriter)

The main thing to take away is no matter how daunting it may seem to reach out to a friend about their mental health, even while isolated, there’s all sorts of ways to easily break the ice and start talking. It takes such a small amount of time and can make such a big difference.

And it matters because suicide is the second-leading cause of death among young adults and we need to do all that we can to change that.

Why will the final assets resonate with consumers? (Mietta McFarlane, Senior Copywriter)

First of all, it's a really catchy song that many of us are still humming to this day.

We also knew this market wasn’t one that liked being lectured with overdramatic cautionary tales. So instead, we went with a lighthearted comical tone that encouraged young adults rather than chastising them.

On top of that, we designed everything to look and sound like the hundreds and hundreds of memes, photos, videos, challenges that young adults scroll through and engage on their feeds everyday.

Our incredibly talented artist, Akinyemi, knew how to deliver our message and how to make it resonate most with Gen Z because he’s Gen Z. In addition to him, a bunch of influencers our target knows and loves like Addison Rae, Avery Cyrus, and Mxmtoon, and more make cameos throughout the film.

Also, we didn’t just throw the film anywhere, we cut it down and optimized it for channels we knew our target had eyes in like TikTok, Snapchat, Instagram. We were even fortunate enough to air the film during the “Graduate Together: America Honors the Class of 2020” prime time television special. 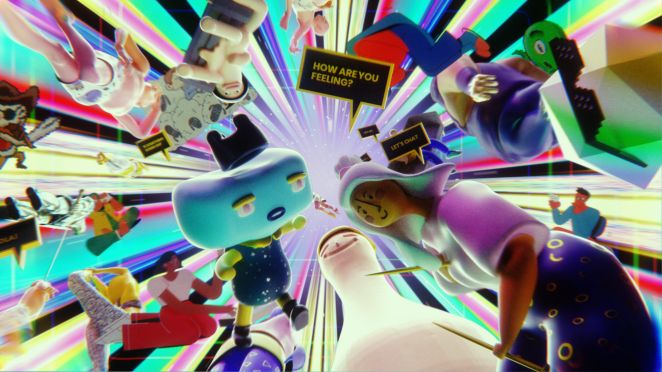 What is one unique fact about the campaign that will help it cut through? (Kevin Brady, Executive Creative Director)

It’s remarkably simple. The concept, the message, the lyrics, the chorus, the problem, the solution— it’s all simple and laid out for young adults to easily put into action.

Their lives are complicated enough, especially now, and we wanted to do everything we could to not add to that complexity. So we’re giving them the tools and empowering them to make a difference in a very blunt way.

How long did it take from inception to delivery? (Mietta McFarlane, Senior Copywriter)

We got briefed back in August 2019. So from start to finish it was around 10 months, which just flew by.

What do you hope it achieves for the brand? (Luke Chard, Senior Art Director)

We hope the campaign will help make Seize the Awkward synonymous with empowering young adults to talk about their mental health.

How satisfying is it to see it out there after so much hard work? (Kevin Brady, Executive Creative Director)

It’s such a dream to see it get such a lovely reception. When you’re in the thick of it for so long, you never really know what's going to happen once it's out in the world. And we’re just ecstatic to know people share our love for the work and the belief in the cause. 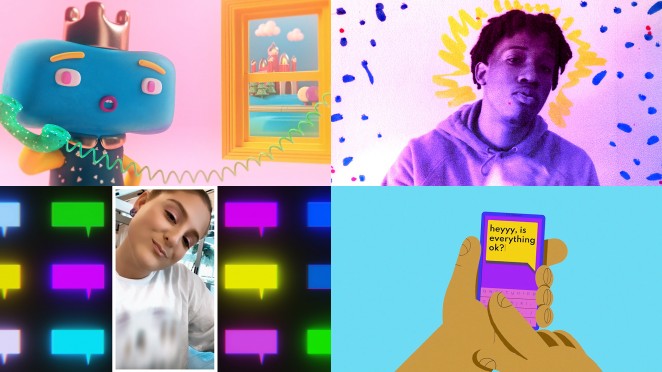 Droga5 is a global advertising agency with offices in New York and London.