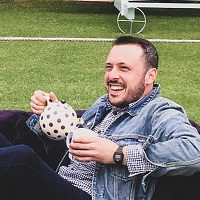 Idea
We came up with a social campaign. The idea was to create a challenge, one influencer had to share 50.000 thousand chocolate bars over a set amount of time.

So we looked for a person who was present on all social channels to create content with them.
We found Arron Crascall, who is massively into chocolate.
Arron became the frontman and we became his writing room and probably his best production team he ever had.
We tried to stay authentic to Arron’s content and audience, to create fun executions.
Over four weeks Arron had to share 50.000 chocolate bars and we created 3 films a week.

It was Cadbury’s best performing social media campaign ever, reaching beyond the UK market. We not only grew product awareness but Arron’s own follower numbers.

Add yourself to this project
Project featured: on 19th May 2020