We all love to-do lists and post-it notes. Ticking a box and binning a sticky give us great satisfaction – so why shouldn't we look at the UN's Global Goals like a gigantic to-do list for the world?

This was the idea behind one of the latest Karmarama campaigns, in partnership with Project United – a charity operating to promote the UN's 17 Global Goals. In a world-spanning series of shots, the short film by Karmarama shows 17 sticky notes hanging from skyscrapers, the Pyramids of Giza and more from the globe's top locations, highlighting the importance of following our world's "to-do list" to ensure a better future.

Today we are getting Behind the Idea with Rachel Holding and Dan Leppänen (creatives) from the Karmarama team to learn more about this unique campaign below. 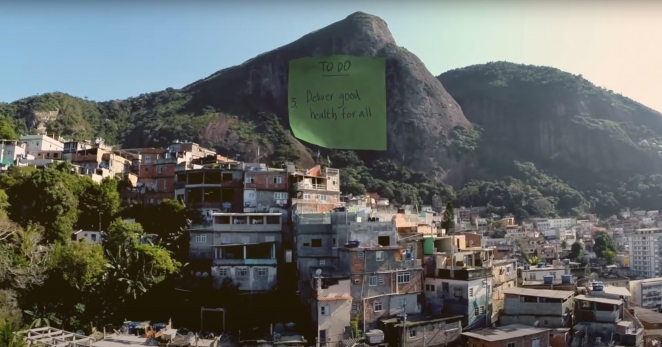 We like to joke that the brief was to ‘save the world’. But it wasn’t far off.

In 2015, 193 world leaders signed up to The Global Goals. A list of 17 priorities we need to address by 2030 to ensure we can create a just, sustainable planet and way of life for everyone. But 6 years in, we haven’t made nearly enough progress.

We were tasked to raise awareness and understanding of The Global Goals in a critical year that needs action and engagement. 2020 proved that we can change the world overnight if we’re willing. It’s simply a lack of action that prevents things changing for the better.

We needed an idea that could bring everyone together – citizens, brands and businesses, and world leaders – to create unmatched progress towards the goals in 2021.

With a lot of talk of sloths. And Cornish pasties.

We had lots of ideas. But ultimately, we knew it wasn’t enough to simply remind the world that The Goals existed, we needed people to feel like they could actively do something about them – that if we work together, saving the world can be as easy as remembering to buy milk.

And what better thing to use than something synonymous with to-do lists and action? A sticky note.

By using sticky notes, we could take all the problems, and all the solutions, and reduce them down to something brutally simple. Suddenly, these 17 big, amorphous priorities are immediate actions ready to be taken. They are The World’s To-Do List.

But a to-do list for the world was no good stuck on a fridge door, it needed to be stuck somewhere everyone would see it. On the world itself. So we asked brands and businesses to step up and show the world that The Goals must come first, by sacrificing their media spaces, and allowing us to use their buildings, websites, and social accounts as pinboards to stick our ‘To-Do list’ on.

Because it’s a global campaign, the production process was quite complex. We needed to rally lots of different brands and businesses around an idea that was still at concept stage, to ensure we could create an impactful launch.  (And asking brands to cover their logos was never going to be a walk in the park either).

But the biggest challenge is one we’re still facing: getting the sticky notes onto big buildings around the world.

It’s not every day that you have Richard Curtis as a client. The first time we presented The World’s To-Do List idea to Richard, he showed us his sticky note to-do list for the day. Thankfully he managed to slot us in between Julia Roberts and Prince William.

We need to remind world leaders, and the public, that the world has a to-do list, and together we can get the World’s To-Do List done.

That moment you realise that the whole world is your demographic.

Roughly 1.5 years, but this is just the start.

To raise awareness of The Global Goals so the public start holding world leaders to account for the promises they made when they agreed to the Goals in 2015. We need to see real action and we need it quickly.