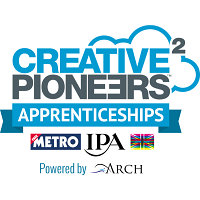 Well done Kieran for becoming Creative Pioneers Apprentice of the month - and thanks so much for Tom Chown for being such a great and supportive employer. His assessor Craig Cordice nominated Kieran for this months award because of all the apprentices he works with Craig said "His (Kieran's) skills and aptitude for learning has enabled his achieve some of the best learning outcomes I have ever come across".

"Kieran has done exceptionally well with his apprenticeship in Level 3 Creative and Digital Media. He’s brought youthful enthusiasm and interest in all things video to the studio and has over the last year developed into a strong team player. As a Production Assistant he’s mucked in with all tasks associated with working in a small agency, from all aspects of pre-production to assisting on location in some testing environments for the British Army as well as assisting with post-production and developing a keen eye for editing and grading, as well as the more menial day to day office tasks.”
Tom Chown | Founder & Creative Director | Digitom

We all wish Kieran the best for the future

Creative Pioneers 2 has been a Contributor since 1st April 2016.