What have we learned from this LGBT+ History Month?

It just so happens that Cadbury decides to release a brilliant ad, called Golden Goobilee, where the brand showcases several ways of enjoying their gooey and delicious Creme Eggs. It just so happens that, for about 5/10 seconds, the ad shows a multi-racial gay couple kissing and sharing an egg on screen.

This is the kind of idea that I myself have praised quite a lot in the past month. LGBT inclusion shouldn’t feel tokenised: awareness comes from believing in the values you preach, and from normalising what should be normalised without making a big deal out of that. And in this sense, Cadbury doesn’t just tick a box with its ad – makes a genuine and powerful move towards better representation in advertising.

The couple is a real-life couple by the way, namely Callum Sterling and Dale K Moran.

Now, a bunch of conservative Christians and “defenders of family values” have released a petition to ban the ad. Am I surprised?

This petition is so ridiculous I’m not even going to link it to give it any more views. What’s concerning is certainly that it already collected over 25,000 signatures in the attempt to ban the ad. As reported by Delish, the petition claims that the ad was ill-received in the LGBT community as well and it attempts to “hide [Cadbury] under cover of LGBT rights to conduct a campaign which sexually objectifies individuals.”

Please pardon the gallicism, but that is some utter bullshit.

Seeing the unjustified backlash, Callum Sterling turned to social media to express his disappointment in an Instagram post. “So it’s ok when an advert sexualises a woman to benefit the male gaze and make other women feel inadequate if they do not live up to this beauty standard. But it’s not okay, in 2021, to have an advert of a multi racial (strike one) gay couple (strike two) on your screens for 10 seconds (strike three) eating/kissing/sexualised (strike four).”

Luckily Callum claims to have developed an extremely thick skin in his years as a queer dancer in London, but not all members of the LGBT+ community will be as lucky. I am quite sure that the sheer thought of such a petition being out in the open and collecting this many signatures is hurting somebody right now, maybe even someone fighting for acceptance or trying to figure out their own sexual identity.

Here on the Creativepool Magazine we opened our Diversity Month with a note of optimism, but it’s hard to keep thinking positive when stuff like this keeps happening. If there is one thing we all learned from LGBT+ History Month, it is that there will always be one new group determined to go for marginalised people.

But you need only start with tiny steps to stir change and set things in motion. Luckily, these tiny steps are starting to add up. And the response to the petition was quite encouraging to say the least.

Obviously the main regulatory bodies in advertising (most notably the Advertising Standard Authority) stated that they are not going to take any action to ban the ad. The kiss on screen was not graphic or excessively sexual at all, and apart from a bunch of indignant conservatives. the ad was actually well received.

Under the original post, user Sati said “We need more commercials with lgbt displays of affection. Best way to weed out homophobes off a network.” 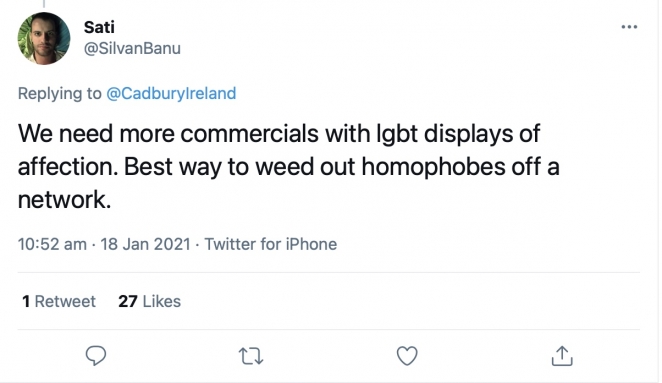 Another user clearly said that even those who don’t usually buy Cadbury products will now be driven to purchase them on the sole basis of this ad and what it represents. Of course someone labelled this user a “fucking idiot,” clearly in an attempt to project their own ignorance onto Ernest below. 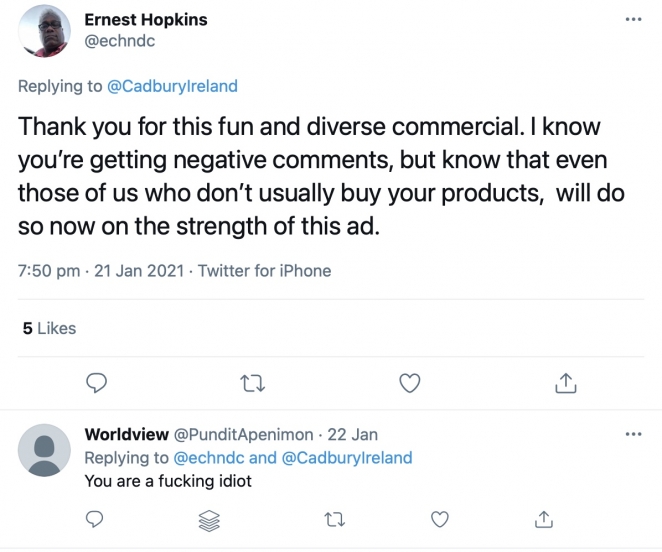 But maybe this is the most interesting bit:

Towards a more diverse industry

Perhaps I’m just a dreamer or a chronic and hopeless optimist, but I would have been quite surprised if the ASA deemed the ad to be inappropriate and if any advertising body actually banned it. I like to think that, even though the path ahead is still long and twisted, there have been some amazing steps taken in the past 20 years or so, and that diversity and inclusion are all but getting worse in the industry.

Perhaps one point of concern is this warning issued by the Investment Association to top UK firms. It seems that some top brands, agencies and companies are not exactly practising what they preach, and that their top boards are not as diverse as they should be. Hopefully this warning to the biggest 350 listed firms will be an important step towards reaching true diversity by the end of this very year.

But this is the thing: we know people don’t like change. As professionals who constantly work to clients standards, we should know what that means. It will take some negotiation and certainly a more prominent push in the right direction, but the industry will become more diverse and regulatory/chartered bodies are starting to realise the need for that, too. That is encouraging, and certainly something to look forward to in the near future.

And if all that it takes is for creative teams to start somewhat of a grassroots movement to reach that goal, so be it. The creative professionals of today will be the top managers and board members of tomorrow.

So as we approach yet another Pride Month, think of how you can make a difference. We have published loads of articles on internship/apprenticeship programmes to promote diversity, tips and tricks for HR departments here and there, and most importantly the best and worst marketing practices to show support to the LGBT+ community.

Don’t be a stranger. Plan something big this Pride Month, something the entire industry will remember.

The leaders, managers and board members of tomorrow will be grateful for that.

The AD is super cute, and there's nothing wrong with two guys showing affection and sharing a Cadbury.

About the number of signatures, they can be using someone else's info to sign it as well, so it's probably fewer people than it seems.