Marketers have revised their budgets up in the first quarter of the year thanks to a growth in online ad spend, according to the latest IPA Bellwether report, which reports an extension of a record run of marketing budgets’ growth to four-and-a-half years. A net balance of 11.8% of companies said marketing budgets would increase during the first quarter of 2017, down from 12.9% for the final quarter of 2016.The outlook for 2017/18 budgets remain positive among marketers too, the report suggests, with a net balance of 26.1% of companies signalling growth for the coming year. Meanwhile, 32% of companies surveyed reported an improvement in their financial prospects, compared with the less than 19% that thought things would be worse during the quarter. The net balance – up 13.9% – is an improvement from 11.2% recorded in Q4 2016. 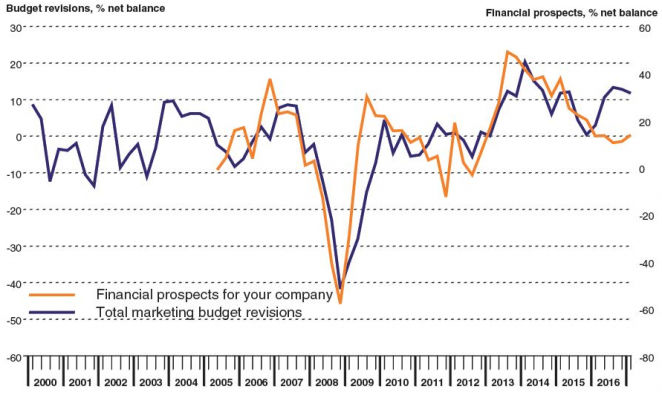 Other categories that registered an increase in marketing spend included sales promotions (1.2%) and PR (1.1%). However, "other' (-4.5%) and market research (-9.9%) both recorded worse budget positions compared to those at the end of 2016. Adspend is expected to stagnate next year, according to Bellwether, with growth expected to return in 2019 and 2020 with rates of 1.8% and 2.3% respectively. However, the IPA said uncertainty over Brexit negotiations and the UK’s departure from the European Union meant current forecasts remain uncertain, and with the recent 2017 General Election announcement, things are bound to get even more uncertain in the coming months.

Paul Bainsfair, Director General of the IPA, said: “Once again the Bellwether shows that while the impact of Brexit remains uncertain, marketers are continuing to invest in marketing. Furthermore, despite the current, turbulent digital ecosphere, it is clear that marketers are attracted to the cost-effectiveness of digital advertising and its ability to reach and accurately target their consumers.” 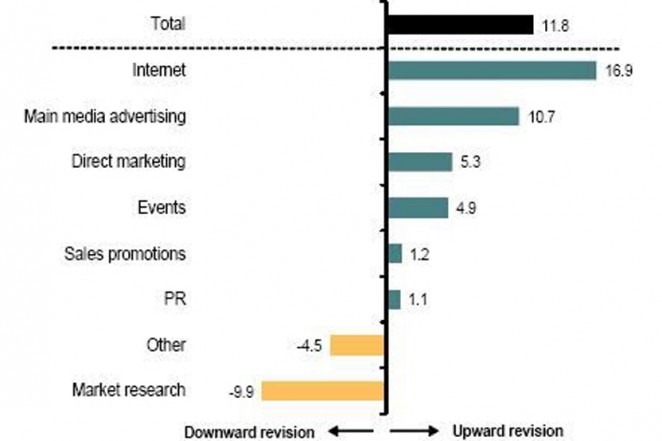 It’s extremely reassuring to see that the growth in marketing budgets has been sustained for another quarter. Mobile-based advertising has picked up, with a net balance +10.3% in Q1 2017- the highest ever recorded for the mobile sector. This is obviously great news for our industry and shows that brands continue to value mobile when looking to engage with consumers. As the report shows, despite marketing budgets increasing quarter-on-quarter, overall confidence has been dented. And whilst there’s a certain amount of uncertainty around us, with ongoing Brexit negotiations and the looming election it’s difficult to imagine mobile not being put at the top of the agenda in UK boardrooms. To maintain consumer confidence in uncertain times, brands should be doing everything they can to continue a healthy and relevant dialogue with consumers – mobile, as the device we carry with us at all times, offers a great way to do this.

The continued upward trajectory of marketing budgets are a strong sign of confidence for the UK advertising industry, especially when put into context with the growing uncertainty caused by Brexit and the snap general elections called by the Prime Minister on Tuesday. Unsurprisingly, internet spend has bounced back from last quarter’s revision and picked up the highest recorded growth in just under four years (net balance: +16.9%, from Q4 2016’s +12.1%). Mobile-based advertising also shows how seriously brands are looking at dual screening opportunities and building multi-channel campaigns by recording its highest rise since it was introduced to the report last year. With new innovations such as voice and the continued growth in programmatic media, digital platforms will continue to demand a greater share of overall budget. As an example, algorithm optimisation for voice is going to be an industry game changer and this quarter’s Bellwether report mirrors a lot of conversations we’re having with clients at the moment around how to invest their media spend. Whilst traditional channels are still very much in the mix, more often than not, the best results are garnered from using digital in tandem with more traditional channels and the report reflects that.

The snap election announcement will inevitably bring a further degree of uncertainty to the market. However, at Sky Media we are encouraged to see that client confidence in the effectiveness of advertising remains undiminished, as witnessed by their upbeat mood with regards to future budgets in the latest Bellwether report. The TV market has had a bumpy ride over recent months but we are heartened by the positive sentiment shared by many about the near future. A future in which TV is well placed to deliver long term brand building benefits in a transparent and safe advertising environment.

Despite high-profile concerns over programmatic transparency and the lingering uncertainty of Brexit, the online advertising industry continues to show positive growth. The latest IPA Bellwether report shows that brands continue to have faith in digital advertising, as shown by their spending commitments. This is of course something we welcome and aim to foster further by encouraging greater brand safety and transparency. The continued growth of marketing budgets are largely underpinned by improving financial prospects. The growth of the ad sector is tied to Britain’s overall economic performance and political stability is closely tied to this. The Prime Minister’s call for a snap general election has already sent sterling surging, however, this is a very short-term economic indicator. Pending the ensuing result of the election and of the ongoing Brexit negotiations, we’ll be in a better place to assess the longer-term health of the industry. However, if current trends to continue, things are looking promising.

It’s positive to see that, despite the current changeable political climate, combined with ongoing debates around transparency and trust, marketing budgets continue to grow. With traditional media advertising seeing the highest balance in just under three years, marketers should continue to look to premium mediums to protect their relationship with consumers; out of home is more powerful than ever before, due to its impact, relevance and creativity as a platform for brands looking to build awareness, whether that is through billboards or digital display. Innovation is at its heart, with continuing investment in digital infrastructure making 2017 a truly exciting year.

The marked increase in ‘main media’ advertising budgets revealed by the 1Q 2017 IPA Bellwether Report bodes well for traditional advertising mediums. It may in part reflect some early shifts in ad budget allocations towards tried and tested ad solutions, such as TV, as digital's effectiveness is increasingly called into question. This may help TV lure new or returning advertisers in the near term, which accounted for 1.6% of total TV ad revenue in the U.K. last year, according to Nielsen data presented by Thinkbox. Yet the ad outlook remains somewhat elusive amid the ongoing uncertainty, which may be prolonged by the upcoming elections. Though the relative resilience of the economy may have alleviated some concern over the extent of the expected slowdown in ad spending growth this year, the impact of higher inflation and weak wage increases could take a toll on household consumption growth this year.

The results overall are really encouraging as marketing budgets continue to grow and adspend is forecast to increase. It might seem counterintuitive that marketing budgets are set to grow against a backdrop of uncertainty, but this is a sign that boardrooms are starting to properly value marketing as an engine of growth rather than a cost on the balance sheet - a welcome sign of the times as chief marketing officers become chief growth officers. It’s also encouraging to see main media has had its best result in 3 years, as marketers direct their increased budget towards these channels. This, coupled with the fact that we don’t expect digital adspend to decrease anytime soon, is encouraging from a performance perspective as a cross channel approach is the most effective way for brands to maintain long term growth. The increase in spend in main media can also can be attributed to a heightened awareness of ad placement, a consequence of a slew of negative headlines. With brand safety high on the agenda, we could see a return to more direct buying and a renewed focus on the content brands are being associated with.

It’s good to see spend increase again, especially as marketers respond to the rise of mobile and the opportunities afforded by more sophisticated search techniques that can capitalise on factors such as location and price sensitivity, alongside Google rewarding quality brands and mobile optimised sites. While marketer confidence is still good, the apparent wider economic uncertainty will drive innovation in fields such as Artificial Intelligence (AI) as marketers grapple with the age old problem of delivering more from their budgets against a backdrop of increased complexity. The key for marketers in the age of AI will be ensuring they understand how to recognise what is current hot topic AI and what is hot air. Developing this understanding will help them pitch their budgets for investment to ensure the applications, technologies and available data align to derive best value and meet their needs. AI still has a long way to go but already has the potential to free marketers from the grind of managing the very many moving parts that occupy considerable resources in delivering optimal execution. This will bring significant opportunity to liberate their creative and critical thinking and get back to a more rounded view of marketing.

These stats are indicative of the confidence we have seen from our client base in spite of broader economic and political instability. We’ll be watching to see if this stands true in light of further uncertainty caused by the news of another general election. It’s positive to see internet forecasts continue to rise, despite the recent challenges that the media industry has faced. This points to advertisers having a more advanced understanding of the role of digital, and their ability to measure its real business impact beyond the issues that have been so widely reported. As people consume more content through their phone and online, we will continue to see digital spend increase, which should provide further confidence for the future growth of all channels not just ‘traditional’ digital channels. The success of digital advertising, in particular mobile advertising, is down to the fact that the consumer is in control - they can watch what they want when they want and its far harder for marketers to legitimately interrupt this experience. Brands that understand the mindset of their audience, and crucially when they are receptive or not, will be the ones that continue to succeed. Additionally, our continued ability to measure and report on mobile spend is helping to support greater advertiser confidence in the role of mobile media.

At a time when other traditional channels like social media have started to unravel in terms of over inflated metrics and figures, and consumers are seeking digital detox and experiences, it’s not surprising to see experiential continuing to grow. Brands are consistently coming under more scrutiny. Consumers have more power than ever, which in-turn means physical activations now carry more risk. Bigger stunts have more potential to go wrong, and therefore marketers are considering it more carefully than before. There is also a lack of tools to clearly measure the impact of experiential marketing. Being able to prove the ROI should be a focus for the industry.

There could be many reasons for a slow down but brands could be opting for a ‘wait and see’ approach to budgets. The start of 2017 has been uncertain for a lot of people and committing to large budgets before companies know the landscape could be seen as risky. It’s too early to truly predict, however in my experience, when there’s turmoil and uncertainty in the world, clever brands emphasise their humanity to engage with people. Look at how many companies highlighted their long, dependable history during the chaotic 2008 financial crisis. Event marketing is a smart way of bringing people together.