The Cannes Lions International Festival of Creativity remains a cornerstone event for the advertising industry, even now, in its 65th year. Whilst there are plenty of changes to consider at this year's festival, with Publicis “taking a year off,” a significantly shortened runtime (just 5 days this year, as opposed to the usual 8), and a greater overall emphasis on making the festival more affordable and inclusive, I thought I'd begin my 2018 coverage in more familiar territory.

So, as we look ahead to what promises to be a very different, and much smaller, Cannes Lions next week, I reached out to some of the most respected industry thought leaders in my quest to get back to basics and ponder which good old-fashioned (and not so old-fashioned) campaigns might be walking home with a Grand Prix (or 4) this year.

It's A Tide Ad (Tide) by Saatchi & Saatchi New York

Poised to be this year's “Fearless Girl,” this beautifully shot, effortlessly smart (and very meta) Super Bowl ad was so popular amongst my pool of commentators, that I actually had to ask people to stop talking about it! Is it really THAT good though?

Helen James, Managing Director at Crispin Porter + Bogusky London – A detergent ad, but not as we know it. This was a clear winner among the public during this year’s Super Bowl ads and it seems to be one of those rare ads that delights both consumers and ad industry stalwarts. The ad was officially entered by the client, to get around the Publicis Groupe 2018 ban on Cannes. Nice workaround.

Stephane Soussan, Creative Director at Sid Lee Paris – One of the best hijacked ads ever. A simple idea with huge means.

Rob Kavanagh, ECD at OLIVER UK – This campaign could run for years. It’s already timeless. Tide sent up the tropes of other sectors’ ads, with David Harbour shamelessly plugging the detergent in diamond ads, car ads, beer ads, supplement ads, shaving ads – the lot. It’s just so on the nose. And for a brand like Tide to come away as the Super Bowl hero? That’s award-worthy. So yeah, like David says. I guess it does make every Super Bowl ad a Tide ad.

Wieden+Kennedy London CCO, Neil Christie – Tide’s smart Super Bowl campaign by Saatchi New York suggests that every ad in the break is, in fact, a Tide ad. This one seems to be picking up a bit of momentum amongst many of the creative community. It will be interesting to see if it wins big at Cannes, since this is supposed to be the year that Publicis agencies are skipping the festival.

Ben Brazier & Johnny Ruthven, Senior Creative Team at TBWA\London – A masterclass in finding an innovative way to peddle the same old message. They've found this killer insight, that all clothes in ads are spotlessly clean, and turned it into a media first; one brand owning ALL the Superbowl ads. And all ads from then on. Forever. It's beautifully written, with the right amount of restraint, and it's shot perfectly to parody other genres. It's the best thing I've seen in ages. And this year at Cannes, nothing beats it.

Chris Cassell, MD of marketing agency White Label – ​There’s one piece of work that I’d put my hard-earned marketing dollar on winning big. It’s smart, funny, and more importantly, it instantly made me think, “Damn, I wish I’d thought of that” It’s a Tide Ad was a simple, subliminal and infuriatingly clever idea that saw them totally own the Super Bowl. After pointing out that every ad in which someone is wearing pristine clothes free of any stains is effectively a Tide ad, David Harbour says, “So, does this make every Super Bowl ad a Tide ad? I think it does, watch and see.” And that was that. Every time an ad came on everyone looked at each other thinking, “Tide?” Even the game itself became a Tide ad.

Cordell Burke, Creative Managing Partner at bigdog – Tide’s Super Bowl campaign by Saatchi New York is an absolutely brilliant piece of work. Hijacking the popular spot and claiming it all as their own was so clever – the ideal combination of a strong idea perfectly executed.

Rob Kavanagh, ECD at OLIVER UK – It’s one of those ideas we all wish we’d thought of. One of those ideas simpler than the nonsense you spout with your mates down the pub, but more poignant, more immediate than, say, that aftershave for mice you were pitching after your sixth pint. And infinitely more purposeful. LADBible and the Plastic Oceans Foundation looked at the horrific effect plastic waste has on our seas, and decided to claim it for their own. A pile of rubbish in the North Pacific, the size of France, has now been dubbed the Trash Isles – the plan is to have it recognised as an official country by the UN. Now, that’s an idea big enough to fill a tweet. Hardman Ross Kemp fronted the ludicrous campaign video; he urged people to become Trash Isles citizens, thus ensuring the world’s first country made of trash will be its last. Al Gore was the first official citizen. Let’s hope ManBearPig doesn’t emigrate.

Neil Waller, co-founder of influencer marketing platform Whalar – LADBible’s The Trash Isles is notable for being so different, and it has such a shocking and important message at its heart.

Nothing Beats a Londoner (Nike) by Wieden+Kennedy

Helen James, Managing Director at Crispin Porter + Bogusky London – It’s unclear if this will have been entered to Cannes, given that Nike pulled the ad from YouTube last month due to legal shenanigans over the ownership of the word “LDNR.” It’ll be a shame if so, because this is joyous, uplifting work that deserves to win big.

Stephane Soussan, Creative Director at Sid Lee Paris – One of the best ads of the year. Great writing and wonderfully directed by Megaforce.

Neil Waller, co-founder of influencer marketing platform Whalar – It's been a great year for empowering voices we haven't previously seen in advertising before, and I think the Nike Londoner advert really embodies this. 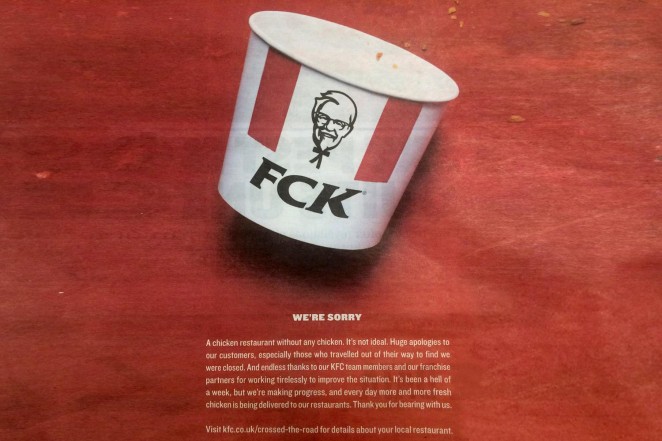 Ogilvy Paris Creative Directors Mark Forgan and Jamie Standen – Probably the best response idea in ages. The only thing more terrifying than an angry mob is a hungry one, and humour was the perfect defensive weapon here.

Daren Poole, Global Head of Creative, Insights Division, Kantar – The UK KFC crisis work achieved global reach and is a good example of crisis comms. It was, I suspect, planned spontaneity and deserves to be recognised. I suspect a number of the winners won’t have had wide reach before the festival.

Helen James, Managing Director at Crispin Porter + Bogusky London – The very definition of charming, the “Barbers” spot makes me wish such a barbershop existed. Barely a month old and this ad is making waves. It’s got to be a major contender at Cannes. As for “Welcome Home,” it's a short film, an ad, a music video or a piece of digital art? Whichever way you look at it, this is beautiful in a surreal way – and it makes me want to buy a Home Pod.

Olga Egorsheva, CEO and Co-founder of Lobster – Apple’s “Homework” ad puts joy in something so tedious; even us adults can remember the disdain we held for after school work. With it also being Apple’s first appearance, don’t be surprised to see the tech giants walk away with a Lion.

Federico Garcia, Executive Creative Director at HUGE – In my opinion, the only ad that could take away the GP from the Saatchi folks for the Tide ad is Spike Jonze's Apple Home Pod spot. Simply stunning.

Rob Kavanagh, ECD at OLIVER UK – Tesla doesn’t advertise. It doesn’t really need to. But on 6 February 2018, Elon Musk’s Space X launched one of his other brands – and his actual car – into orbit. Playing Bowie’s Space Oddity. Of course. The Tesla brand was front and centre again, mere months after the Roadster’s trick-reveal hogged headlines. Musk has proven, time and again, that innovation can always be found not just in his products, but in the brazen way in which he markets them.

Helen James, Managing Director at Crispin Porter + Bogusky London – Ok, so yes Liverpool lost the Champions League final last month. But before that, they’d had one of their best winning streaks in years. Is it pure coincidence that this streak coincided with the launch of Carlsberg’s special edition beer, crafted to celebrate the brewer’s 25-year partnership with the club - a beer made from hops that had been exposed to the sounds of Liverpool FC’s finest sporting moments, as they grew? Probably. An entertaining idea from us here at CP+B, and one we think feels quite Cannes.

Palau Pledge (The Giant) by Host/Havas​

Ogilvy Paris Creative Directors Mark Forgan and Jamie Standen – A simple and powerful idea that could have been done years ago – for as long as passport stamps have been around. These small island nations are on the front line of climate change and need every smart idea they can get.

Cordell Burke, Creative Managing Partner at bigdog – Palau Pledge by Host/Havas, found a way to genuinely change behaviours. Transforming the country’s passport stamp into a pledge for visitors to follow was a fantastic creative solution to a serious problem. They took a key message, about urging visitors to respect the environment, and created a campaign so impactful it resonates far beyond its point of origin.

Amie Green, Head of B2B Marketing at Flipboard – I love everything that Spotify’s done - the David Bowie NYC subway takeover with the Brooklyn Museum was a show-stopper for anyone in the city and the “Love what you love” campaign is incredibly clever. I must have taken a dozen photos. They should stop putting out great ads, it’s slowing down my morning commute!

Nothing to Hide (Absolut Vodka) by BBH London

Chris Cassell, MD of marketing agency White Label – Absolut Vodka’s “Nothing to Hide” caught my eye (and made me blush). As well as being hilarious (because it features naked people) it makes one of the drinks industry's largest and often considered most “mass-produced” vodkas feel human. It also manages to communicate wholesome values without ever feeling worthy or preachy.

For more on Cannes Lions 2018, keep your browsers tuned to Creativepool over the coming fortnight. We'll be examining more insider opinions in greater depth, exploring the major changes afoot this year and interviewing some of the industry's most respected talking heads on their Cannes predictions. We will also be on the ground in Cannes next week for some face-to-face discussions and to keep you up to date with all the major wins and all the hot gossip.

The top parties to attend at Cannes this year