Donald Trump’s positions change so often that the simple task of asking, “Did he really just say that?” can be genuinely exhausting. So, SS+K and messaging bot platform Dexter have brought The Donald's most hurtful, damaging, and hate-filled messages into one place with BFF Trump; the only Facebook Messenger bot that gives you a virtual one-on-one conversation with the biggest and loudest mouth in the US of A.

The reasoning behind the platform is that, whilst Trump is everywhere right now, his words aren’t making it through to younger voters who could drive this November's presidential election, and who would likely be horrified by what he says. But the top news source for millennials is Facebook, and they’re spending more time in messaging apps than anywhere else, online or offline. Facebook's engagement algorithms can skew the kinds of content millennials are receiving, so the real Trump, is largely absent from the news feeds of the politically disengaged masses. The answer, SS+K realised, was to bring actual Trump quotes to Facebook Messenger. 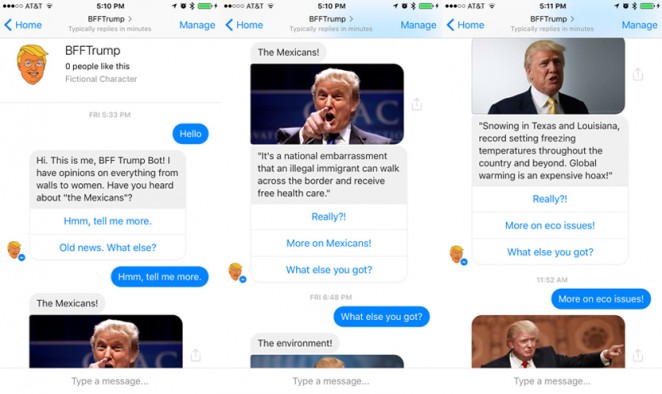 To build BFF Trump, the New York-based creative agency partnered with Dexter, a startup from Betaworks, the New York internet startup studio. Dexter is a platform that builds and powers a conversational engine or a brand, service or institution. BFF Trump works on Facebook’s desktop or mobile messenger platform, and guides users through a series of conversations about Trump’s views on women, immigration, and so on. With plenty of existing content from Trump speeches and interviews, SS+K was able to use Dexter’s simple bot building tools to get a prototype out quickly. The bot uses hundred of Trump quotes, and is constantly growing as the Republican presidential candidate continues to come out with corker after corker.

While most bots are utilitarian by nature, providing travel arrangements or weather forecasts, BFF Trump is designed to provoke people into action. And while most bots lack personality, BFF Trump has personality to spare (a narcissistic personality with no impulse control, but a personality nonetheless). The BFF Trump project is essentially a chance for young voters to listen to and reject Trump’s messages before a real President Trump makes those messages unavoidable. You can download the BFF Trump bot HERE and if you do nothing else of note and/or worth today, do this. You won't regret it!