I need your clothes, your boots and your motorcycle. Merry Christmas!

Does anyone actually enjoy writing Christmas cards? I mean, really enjoy it? I’m going to stick my neck out here and say that most people feel it’s bit of a faff they can do without. By card number ten – assuming you’re trying to personalise the message beyond “Merry Christmas and a Happy New Year” – you’re probably sucking the end of your biro and scratching your head, pondering what else to say. “Must catch up in the new year”, perhaps? That ain’t happenin’, I tell you that now.

Maybe you’re one of those people who always encloses a Christmas letter, though; a summary of what you and your family have been up to all year. For some people, receiving these missives instills a sense of dread. Personally, although I’ve never written one, I quite like the idea. Part of the reason I don’t write them is because I’m an embittered middle-aged man who would simply use the opportunity to talk about how his thieving tenants trashed his flat whilst owing £7,000 in rent arrears. Still, at least they bought themselves a nice BMW with my money. So that’s nice.

I guess I could include a picture of my puppy golden retriever Boris (as in Becker, not Johnson), who is sensationally handsome, cute and lovely. But then we’d be entering into the realms of posting baby photos on Facebook where one either has to “like” the photos within a nanosecond or risk being ostracised for the rest of the year.

So I was actually rather pleased to read about the most inappropriate Christmas card I’ve ever seen this morning. And it rather happily falls into that category we love to talk about with a shake of the head: “Only in America”.

Busty Republican Assemblywoman Michele Fiore has revealed her homemade Christmas card. It shows Michele, an ardent supporter of the right to bear arms, centre stage with her family around her all totin’ a gun, right down to her grandchildren. In a recent Facebook post, Fiore commented on the card and stated that, “It’s up to Americans to protect America. We’re just your ordinary American family. With love & liberty, Michele.”

Riiiight. Merry Christmas and a happy dead burglar to you too. But that being said, in a perverse sort of way, I liked it. I will inevitably receive a lot of forgettable Christmas cards with carol singers and winter wonderland scenes over the coming weeks, but this card has the capacity to be a talking point from Christmas lunch right through to the inevitable Boxing Day Bond film. 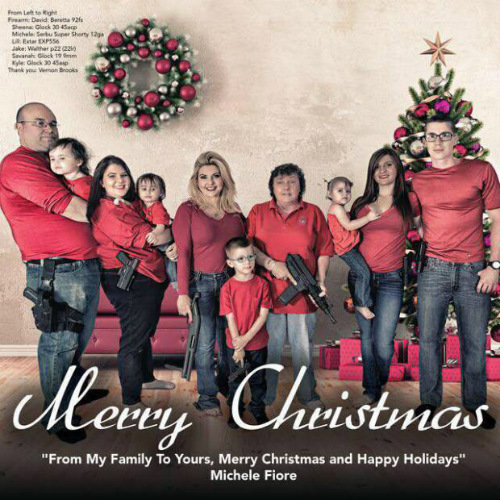 Oh, by the way, describing her as “busty” is not deliberately sexist, in case you’re wondering. If you’ve seen her 2016 “Walk the Talk Second Amendment” calendar, you’ll see that the buttons of her shirt are clinging on for dear life around her midriff while she playfully displays her double barrels. The calendar, “dedicated to protecting the Second Amendment rights of Americans to bear arms”, features various awareness tips and is a laugh a minute even if you only read as far as January. On 6th January, for instance, her awareness tip is: “Limit what you carry so you have a free hand to defend yourself.” Hm, so take your toddler to Lidl, buy a loaf of bread and nothing else (to keep your hand free) so that you can shoot someone in the face. I like it. 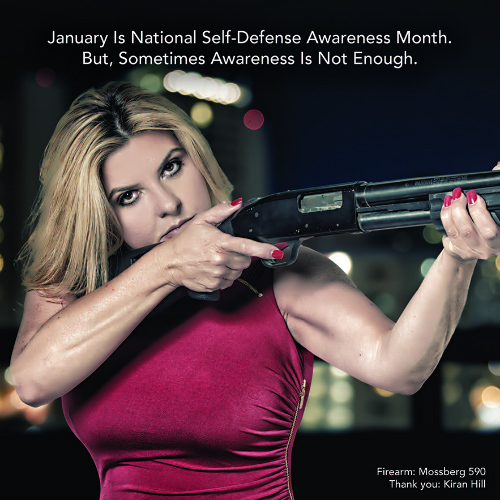 May 2016 bring you and your family joy and laughter. But if you even think about trying to f*** with my s*** then you’re f***ing history.