BBH show us how to deliver a Must-Watch Infomercial

I’ve often thought one of the hardest things to do is to come up with a genuinely engaging infomercial. To turn something rather dull that people “really should” watch and listen to into something interesting and/or entertaining and/or amusing. Sure, you could argue that that applies to a lot of advertising. Well, in a way, yes; there’s nothing very interesting about kitchen cleaner, and yet those I’M BARRY SCOTT Cillit Bang ads never fail to draw me in, in a sort of cringey watch-through-your-fingers type of way. And in my book, Volkswagen remains king of the car ads, no matter what hot water they’ve got into in recent months.

But still, there’s a big difference between commercials and infomercials. Some commercials don’t even mention the product or benefits (if any) at all. Chanel with sultry “You’re The One That I Want” cover version, anyone? By contrast, infomercials have to convey very specific information in its entirety, not just in part.

To date, the best infomercial ever in my opinion is Virgin America’s in-flight safety video. With stunning production, choreography and singing – along with a sardonic dollop of “sorry you have to watch this if you know it all already” – it really did make people sit up and pay attention when the cabin doors closed. The previously tedious five minutes never went so fast.

So today I watched a supremely good example of another infomercial that was pretty much perfect in every respect. Indeed, the time flew by just as quickly as in the Virgin America video. But this was for St John Ambulance; hardly a sexy brand, however great their work. 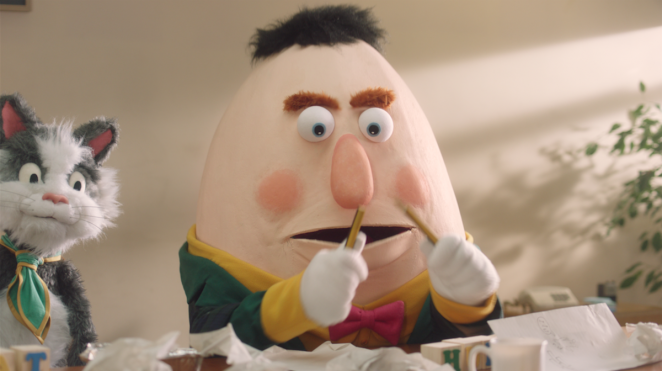 The work of BBH London, the infomercial finds nursery rhyme characters Humpty Dumpty, Jack and Jill, Incy Wincy Spider, and the Cat and the Fiddle sitting around brainstorming ideas in their boardroom about how best to inform parents about the essentials of performing CPR on their choking baby. This is apparently one the greatest fears of any parent, and yet fewer than one in four would know what to do in such a situation.

Voiced by Adam Buxton and Tim Key, the board members of so-called Nursery Rhymes Inc. (with the strapline “we rhyme all the time”) are agonising over the composition of a nursery rhyme to provide this vital information in an entertaining way. The great jazz saxophonist Charlie Parker used to say if you hit a bum note, keep on playing it louder and louder so that people would think you meant to play it. So it is here, with the nursery rhyme characters struggling to come up with a rhyme for “ambulance” (no, there isn’t one – not even “Bambi dance”) to the extent that they brilliantly over-emphasise the point, making it a feature of the song.

Here’s the extended version of the infomercial. Watch and learn.