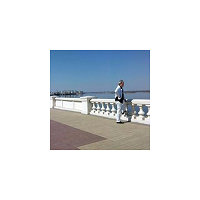 The preliminary sale of tickets for the sci-fi film "Absolute Access" is open!

The headquarters of the "World" corporation occupies a 200 storey building on the Atlantic coast, fully managed and serviced by robots.
Bill, Mark, Carl, Jeff, Larry - members of the board of the corporation "World" at the annual meeting of the corporation adopted a strategy for the development of the world. Its main postulate: absolute robotization of all production and services within the planet for
Saving on people's resources and increasing profits. To implement the strategy, it was decided to create self-developing robots of the 7th level, indistinguishable from an ordinary person.
At first everything went according to the plan of the corporation "World". But a year later it turned out that no longer Bill, Mark, Carl, Jeff, Larry manage everything on this planet, and 10 robots of the 7th level. (Conflict of two intellects: artificial and natural)