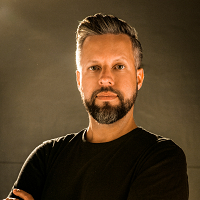 Tim Hortons is the biggest coffee chain and one of the most beloved brands in Canada. Founded by former hockey player Tim Horton, the brand has always had a strong connection to hockey, sponsoring the NHL and thousands of youth hockey tournaments.
With rivals like Starbucks and McCafé encroaching on its turf, Tim Hortons needed to cement its positioning as the leading Canadian coffee, reconnecting with consumers on an emotional level by leveraging its long history in the country.
Wayne Gretzky, the greatest hockey player in history, remembered a special moment with Tim Horton himself. Recently Wayne’s dad, Walter, found a napkin stored in his basement. It was from 1968, when a 7-year-old Wayne went to a Tim Hortons café to get an autograph from his idol: Tim Horton. That moment inspired Wayne to go on to become The Great One.
It’s an unbelievable true story. So, we recreated this historical moment to the last detail, showing how it rippled in time and motivated a young hockey fan to become a professional player.
We researched historical archives of both Wayne Gretzky’s career and Tim Hortons, in order to recreate an exact replica of the original 1968 Tim Hortons café, both interior and exterior spaces. In collaboration with the Gretzky family, we borrowed the original jerseys that Wayne wore throughout his career, all to faithfully recreate his journey.
We created a big bang effect to highlight the importance of the moment the pen hit the paper, and used panoramic lenses and seamless transitions to guide viewers alongside Wayne’s journey, going from one stage of his life to another using lights and pans to achieve a beautiful cinematic choreography.
Over 50,000 Canadian kids auditioned for the role of young Wayne — an advertising record for the country.
The campaign has achieved 5 million views across multiple platforms, as well as being covered by major publications and organically reposted by the National Hockey League. It generated 123 Million impressions amounting to $1.2 Million dollars in earned media.

Anselmo Ramos has been a Contributor since 25th November 2015.