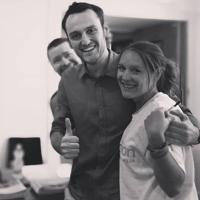 “For Want of a Nail​​” follows Marty, who attempts to live out a 'perfect day'. As the story unfolds it becomes apparent that his range of intricate routines have been compounded by a succession of deaths in the family.

Now, with only his twin sister left, Marty has found himself seeking to finally, once and for all, dispel the urges and paranoia that drive the compulsions which are seriously affecting his life – and, in his mind, stop his sister from dying.

For Want Of A Nail