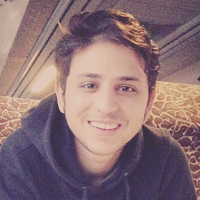 This is an allegorical and mystical story about the villagers hearing of a giant and mysterious creature that has come from India, they steal into the dark barn to find out what it is!
According to the part which each felt, they gave a different description of the animal. The moral of the parable is that humans tend to claim absolute truth based on their limited, subjective experience as they ignore other people's limited, subjective experiences which may be equally valid. And the truth becomes clear to everyone when everyone reaches a consciousness, like a candlelit in the dark.
This story has its roots in Southeast Asia and has been attributed to Jainism, Buddhism, and Hinduism which I tried to illustrate. In addition to these three religions, Sufis have also used this story in their works. Also, Rumi, the 13th Century Persian poet, and teacher of Sufism included it in his Masnavi.
Fortunately, this work has won two international awards.