Halloween. A time for little ones to dress up as their favourite super hero or princess, frighten their friend’s parents and eat loads of sweets.

But the roots of Halloween lie in the Celtic belief that on the eve of October 31st, the end of their harvest, the dead return to earth to ruin their crops and possess the living. So to stop these unruly demons they dressed up in animal skins to confuse them.

We’ve only retained the comedy fun stuff. Nobody’s delivering a plate of hot food to their dead relative’s grave or praying for recently departed souls. So should I tell my kids about the true origins and ruin their treat? Why would I? In the main we’re not superstitious like our ancestors were and nobody wants to talk to children about death. In fact nobody really wants to talk about death full stop.

I’m saying this because I recently lost my Dad. See, another euphemism. I’m doing it now! Ok, I didn’t lose him. He died.

Picking my kids up from school a few days later, the eyes usually trying to seek me out in the busy playground for a chat were desperately looking elsewhere. For too many saying four words - “Sorry about yer Dad” - seems like the hardest thing in the world. The problem is we don’t talk about death anymore and unlike our ancestors we don’t celebrate it either.

So instead we’re left with a marketed comic book style celebration.

Like other holidays in the calendar it’s become a busy time for advertising - which is what I do when I’m not preaching about death. In America during Halloween it is estimated people spend $2 billion on sweets and $300 million on costumes for their pets. I was amazed - that’s a lot of sweets and fancy dressed pets!

As a sound designer every Festival comes with its clichéd sounds. And Halloween is especially fun when it comes to making the sounds of blood and gore that accompany the theme. Unfortunately for some reason we’re not allowed to use real bodies, so we’re forced to use Foley.

In horror films you often hear what would be too distasteful to see - but what you hear can repulse you even more because you imagine it.

As sound designers we picture a human body in a different way to most people. Where they see flesh and bones, we see a collection of materials that make sounds. 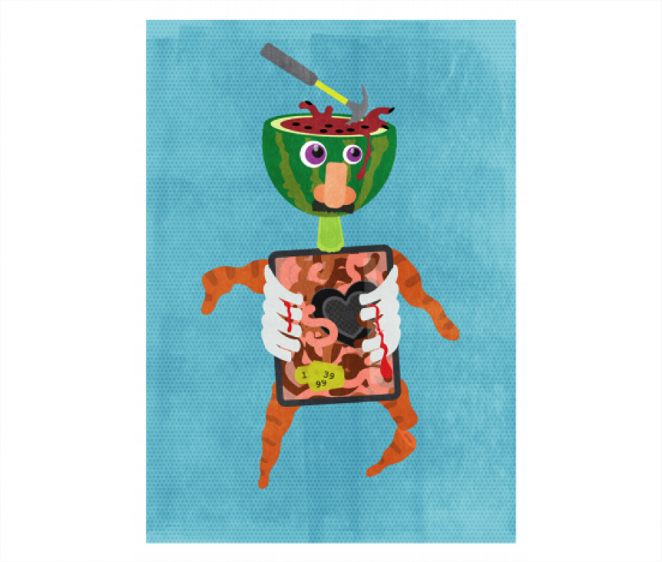 Now you may be a little confused by this, but let me assure you that this is what every sound designer sees in the context of their job.

First the head. Yes, that’s a watermelon. A hard exterior with a fleshy middle - perfect for the sound of head injuries. Take a hammer to a watermelon and you’ve got the sound used for every blow to the head ever.

A mince meat stomach is unbeatable for squishy innards or eye gouges.

A neck made out of celery? That’s right - twisting this gives you the perfect neck break at the end of the hangman’s noose.

Carrots instead of bones… these make the perfect snap for your first big break - but make sure they’re cold.

Let’s not forget the analogue heart. This is essential. A real heart sounds too messy, too noisy and too deep. To cut through on small speakers you’re going to need something that can go Dud-Dum at a higher frequency - the other benefit is you can control the speed of the heartbeat with the pitch wheel. Assuming it’s still beating, that is.

And finally, you’ve probably noticed the dead carcass for a body. If you want the perfect punch you’re gonna need to take a cricket bat to this. Too squeamish? You can always hit a leather seat. It’s the same thing really if you think about it – it’s just got a different filling

Yes we sound designers are weird, but I find it weirder that people spend so much on sweets and pet costumes whilst pretending they’re not going to die. Anyway you’ve got years yet.